Vanlifers, be sure to add some of these campervan gift ideas to your next wish list.

With the likes of Black Friday and Christmas on the way, now is the time to check out our pick of the 10 best campervan gift ideas under €100. In no particular order, we have these items right on the top of our list, should someone get our name in the secret santa.

No van lifer worth the air in their tyres, could say that they have never been caught out with a flat battery. Nothing would be worse than driving hours into the middle of nowhere and accidentally running your starter battery down flat.

The entry level model, NOCO Genius Boost Plus GB40 contains a 12v lithium, 1000 amp battery that can perform some 20 jump starts on a single charge. Easily recharged via a USB socket in 3 hours, and also serves as a power pack to recharge your phone, camera batteries or other similar equipment. The unit also has built in LEDs that can be used as a torch or even as an emergency SOS beacon.

No cell phone coverage, no tow truck for a jump start. No problem! Probably the most practical of all the 10 best campervan gift ideas under €100!

Pouring a steamy mug of coffee or tea first thing on a cold morning is the first thing to tick off when you are out in your campervan.

Outdoor gear manufacturer YETI are renowned for making some of the highest quality coolers and drinkware. We really love the latest colours, Forest Green and Copper Gold, but you have the choice of many in order to maintain the colour scheme inside your campervan.

Got a budget of €100? Buy a few different colours and keep one for yourself!

Tell us your 10 Best Campervan Gift Ideas Under €100,
write to us here

Preorder available now. We recently discovered Voited, a brand hailing from the USA with deep roots in the van life community. These truly score a place on our top 10 best campervan gift ideas under €100. Don’t be scared about leaving your warm van for a pee in the night. Slip on a pair of these cosy slippers and make yourself feel right at home.

We like what Voited are doing with regards to their manufacturing. Products are made from recycled sources, among other eco conscious choices. Head to the website and find out more about what this brand is doing to help reduce the overall carbon footprint.

Get in fast while you have the pick of some beautiful colour schemes, we’d pick the Langoustinos so that spotting them wasn’t a problem when the temperature drops below freezing!

There are some beautiful coffee table books out there, and we particularly like this one from authors Kathleen Morton and Jonny Dustow. “Inspired by the blog and Instagram account, Vanlife Diaries is an inspiring and detailed look into the world of the rolling homes built and occupied by a new generation of modern gypsies: a range of professionals and creatives who have ditched conventional houses for the freedom of the road and the beauty of the outdoors.”

If van space is limited and you prefer digital, there is also a Kindle version available.

German brand Busstoff makes some really practical accessories to fit to vans likes the VW California T5 and T6. One of our favourites is this hanging table that can be quickly hung on the sliding door. Think camp cooking outdoors, or even a shelf for things when you are parked up on a camping site.

The idea behind the Busstoff accessories is that nothing needs to be drilled, screwed nor permanently fixed to the campervan. Just plug and camp. Fantastic!

This one we just needed to sneak in. Newly available is our first run of print magazines! Head to the shop page to get your copy of the latest issue.

And, our digital magazine is optimised for smartphone and tablet, so download any of our issues today, to take away with you on your next advanture.

A big thing for both our English and European readers to consider as Brexit approaches. Will your network provider continue to allow you to data roam? What every van lifer needs is a portable WIFI hotspot, like this one from WIFI Takeaway.

Mobile internet, such as the version where you tether your phone to a computer, uses considerably more data when viewing non-mobile websites. You’ll quickly chew through data, using websites such as YouTube or Netflix. On top of that, streaming speeds are not optimised.

Using a portable WIFI hotspot solves all those issues, providing reliable and extremely fast internet speeds. We use our one to work on the Advanture Magazine, right in the back of our own vans.

Comes in two sizes and is both waterproof and shockproof. The case comes empty, so you’ll need to stock it with supplies for your next road trip. Every adventure van should carry some basics such as wound steriliser, bandage, and various sized plasters. We’d recommend going a step further and sourcing some latex gloves, tape, scissors and more.

Having a dedicated medical kit on board means you know exactly where to go, should you need to quickly grab something to address a small wound. It would be wise to seek out some basic first aid training too, which is available in a wide range of places around Europe.

Practical, but necessary. Don’t overlook the NANUK first aid box for your campervan.

If you like eating, then you simply need an Omnia stovetop oven. This brilliant and incredibly simple piece of equipment allows one to cook basically anything you would do in an oven, right on your stovetop. It works on both gas and electric, so is pretty much compatible in every camper with a cooker. You can also use any portable gas stove, just be sure that it won’t over off while you are cooking.

Advanture Magazine editor, Alex Brown, tested the Omnia stovetop oven during the winter. Getting up for a sunrise ski tour is no trouble, when the promise of fresh bread rolls or hot croissants await your return from the cold.

There is a huge amount of tasty recipes available online, with some of our favourites on the Brown Bird & Co website.

Considering that the Omnia itself doesn’t break the bank, why not partner it with some of the accessories which are also available. The silicone moulds make clean up so much easier, and also help to regulate a bit of the temperature inside the stovetop oven.

The muffin insert totally changes the cooking experience in the campervan. You can go wild here, anything from your favourite chocolate brownies to bacon and egg breakfast muffins.

There are also some very practical items that we would recommend, which include the Omnia carry bag and cooking apron. Bon appetite.

Did we miss something out that should be on the 10 best campervan gift ideas under €100 list? Write to us and share your gift ideas for the campers and van lifers who you’ll be buying for this year. 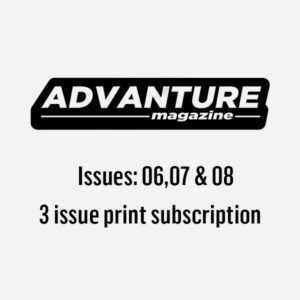 your door. Don’t miss any of our limited edition print journals.